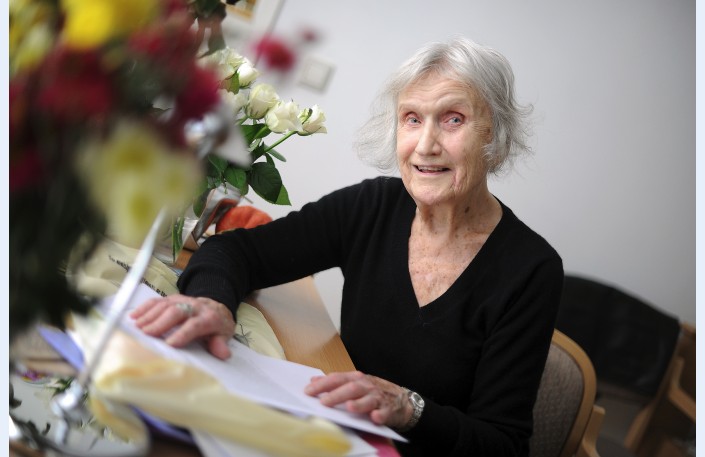 Velta Snikere Wilson is a celebrated and well-known Latvian poet, Yoga teacher, and Autogenic therapist, with an inspiring presence.  Daughter of Russian professor of medicine whose family fled to Latvia when she was 6 yrs old, Velta studied Philosophy at Riga University and came to London just after the war.  She was one of the founding members of the British Wheel of Yoga, and an accomplished Yogini from a young age (she started when she was 13 yrs).  She was also part of the Indian dancing troupe of Ram Gopal between 1956 - 1958.  She was one of the first independent Yoga teachers in London in the 60s, and had many students over the years.  Her teaching was unique and creative, yet deeply rooted in the ancient yogic philosophy.
When I encountered Velta in the mid-80's she was the only teacher I felt happy to train with, as she embodied what I was looking for, a genuine, personal and truthful path.  Her teaching has allowed me to find my own path as she never imposed a style of Yoga, but encouraged each student to access their true nature and potential (see below Velta's definition of Yoga).

Her interests in life, her sharp intellect and great sense of humour make each meeting very enjoyable, inspiring and healing.
She stopped teaching about 3 years ago, her body becoming frailer, and this year she will celebrate her 100th birthday.  She still offers a wealth of guidance to whoever seeks a genuine approach to Yoga and its many benefits.

Velta's definition of Yoga:
"Yoga is nobody's invention, but everybody's possible journey of discovery. Yoga is the alignment and the merging of one's self with the great universal spirit. Generally speaking it can be said, that yoga is the science among religions, if by science is meant method of procedure, freedom from dogma and personal verification. It can also be said that yoga is that art among sciences, if by art is meant the staking of one's personality, if by originality is meant total integrity of expression.
Yoga is not an acquiring of flexibility, but a discarding of tensions and rigidity. Yoga is not an accumulation of information, but a discarding of ignorance. No two leaves are exactly alike, no two individuals, no two yoga paths. There are as many paths as there are individuals treading them. Yoga is becoming alive to one's own inherent path. Being guided by universal laws. Yoga is a re-alignment of our outer lives with our innermost principles and of our own inner self with the vastness of spirit."