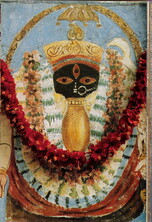 About Marianne Simonin
I am a Yoga teacher, Ayurvedic practitioner, massage therapist and artist.
I have been teaching Yoga and meditation for 30 years and my spiritual path of Shakti sadhana is rooted in the lineage of the Das Mahavidyas and Kali Kaula.
My teaching stems from my profound personal practice in the subject and many stays in India, especially in Gujarat, Varanasi, West Bengal and Assam. I believe that Yoga is a unique and individual journey, and requires a lifetime engagement.  My Yoga classes are creative and empowering, encouraging the students to develop a state of deeper meditative awareness. I have an interest in the therapeutic aspects of Yoga, and I have worked with many students over the years suffering from stress related conditions, depression and anxiety.
The use of asanas and pranayama form the core of the practice, including bandhas and mudras.  I also teach separately Yoga Nidra, meditation, and Ayurvedic principles.
I give regularly workshops/talks on different aspects of Yoga and Ayurveda, and I organize yoga retreats in the UK and abroad.  I hold a Masters degree in Ayurvedic Medicine from Middlesex University, including a three months internship at two Ayurvedic Teaching hospitals in India (Karnataka) SDM Hassan and KLE Belgaum. 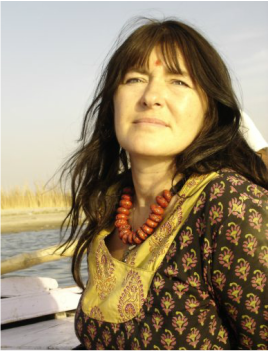 Biography in my own words.
My first love as a child was music, followed by spirituality and Art.  As young as the age of three I often remember sitting at home, motionless, gazing towards the sky or the unknown for a long time while my mother listened to classical music or opera.  Sometimes I would also draw or cut figures out of coloured paper while tuning in to my own "divine connections", entering a world that felt more real to me than reality. These moments remain precious in my heart as they became the foundation of my whole approach to life, intuitively knowing that the energy of the Universe is much greater than we can conceive with our limited awareness.

By the age of seven I felt naturally drawn towards poetry and often spoke to myself in poetic language while walking or cycling through the French countryside. Inspired by Nature or by my own emotions I would create simple rhymes and repeat them on my way to school like little mantras.
Around the age of fifteen a friend gave me a book on Yoga, some of the asanas looked intriguing but it was reading about the philosophy that created a greater impact on my mind. I embraced its concepts quite easily because it was reflecting what I always felt and experienced on a personal level. At that time I never imagined that I would become a yoga teacher, I just wanted to be an artist and a traveler, my gypsy soul always drawn to foreign lands.

Yoga is a path that is often inside you even before you acknowledge it, and it can manifest more strongly at any stage of your life. In my case I felt I could not escape my destiny and followed it almost blindly. Shortly after arriving in London at the age of 18 I saw myself enrolling to yoga classes, which first disappointed me because they were too physical and not spiritual enough. I kept searching for an inspiring teacher and within little time I found myself enrolling for a Yoga teacher training course!  Over a period of 4 years I trained with Velta Snikere-Wilson and qualified with the British Wheel of Yoga.

Later in 1994/6 I discovered Ayurveda through the teaching of Dr Vasant Lad and mostly Dr Robert Svoboda.  The later became an inspiring force in my spiritual development at the time. It is through Ayurveda that I found the path of Tantra. This path spoke to me at a deeper level. I attended his lectures for more than 10 years and it gave me a lot of insight in the importance of sadhana. Later during my several stays in India I encountered Swami Nardanand and Swami Shivanand from whom I gained more practical knowledge of worship practices. The greatest teaching came from the few exceptional souls who happened to cross my path in this lifetime and the eternal connection with Nature.  The more I teach and practice the more I realize that the benefits will manifest in your life when it is ripe for you, and the sincerity in your heart is more important than the results.

Yoga, Ayurveda & Tantra have been very close to me throughout my life, as well as Art (www.mariannesimonin.com). These disciplines have shaped my destiny time and again, for a single seed can bear many fruits.   My path is that from the One there is the inexorable desire to become many, the creative force manifesting in the Universe in all shapes and forms until it gets reabsorbed into the great void, dissolving back into the state of unlimited infinite consciousness.
There are many paths, all valid and fascinating. In the West, Hatha Yoga is the most well-known and accessible, and like for many other people it was the start of my journey, it has since taken me to a more spiritual path, where every moment of life becomes a sadhana. It is no longer the difficulty to set time aside for my practice, it is the exhilarating challenge to use every aspect of my everyday life as an opportunity to practice.

Professional profile:
I have practiced yoga since 1980 and started teaching my first class in 1988 at the Central London Polytechnic. For several years onwards I taught people from all background at the following:

All materials are copyright of Marianne Simonin.